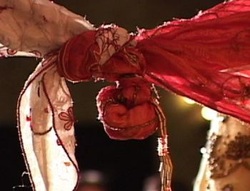 The symbolic matrimonial knot.
Hindu sacraments are called 'sanskars' and the sacraments performed at the time of a wedding are called 'Vivah Sanskar'.
This sanskar marks the start of the second and the most important stage of life called the 'Grihistha Ashrama' which involves setting up of a new family unit.
Two individuals who are considered to be compatible form a lifelong partnership at this ceremony in which the responsibilities and duties of a householder are explained.
The precise details and rituals performed in a wedding ceremony vary from region to region and often take several hours to complete.

•Jayamaala
•Firstly, the bride's parents welcome the bridegroom and his family at the boundary of the house where the wedding is taking place. A red
kum-kum (kind of powder) mark is applied to their forehead. Members from both families are formally introduced, marking the start of relationship between two families.
The bride and the bridegroom then exchange garlands (jayamaala) and declare: "Let all the learned persons present here know, we are accepting each other willingly, voluntarily and pleasantly. Our hearts are concordant and united like waters."

•Madhu-Parka
•The bridegroom is brought to a specially decorated altar called 'mandap' and offered a seat and a welcoming drink - a mixture of milk, ghee,
yoghurt, honey and sugar.

•Gau Daan and Kanya Pratigrahan
•'Gau' means cow and 'Daan' means donation. Nowadays, the symbolic exchange of gifts, particularly clothes and ornaments takes place. The
groom's mother gives an auspicious necklace (mangala sootra) to the bride. Mangla sootra is the emblem of marital status for a Hindu woman. 'Kanya' means the daughter and 'Pratigrahan' is an exchange with responsiveness on both sides. The bride's father declares that their daughter has accepted the bridegroom and requests them to accept her.

(These three parts are the main parts of the wedding ceremony)

Vivaha-homa
A sacred fire is lit and the Purohit (Priest) recites the sacred mantras in Sanskrit. Oblations are offered to the fire whilst saying the prayers. The words "Id na mama" meaning "it is not for me" are repeated after the offerings. This teaches the virtue of selflessness required to run a
family.

Paanigrahan
A sacred fire is lit and the Purohit (Priest) recites the sacred mantras in Sanskrit.
This is the ceremony of vows. The husband, holding his wife's hand, says "I hold your hand in the spirit of Dharma, we are both husband and wife".

Shilarohan and Laaja Homa
Shilarohan is climbing over a stone/rock by the bride which symbolises her willingness and strength to overcome difficulties in pursuit of her duties.
Then, the groom and the bride both gently walk around the sacred fire four times. The bride leads three times and the fourth time the groom leads. He is reminded of his responsibilities. The couple join their hands into which the bride's brothers pour some barley, which is offered to the fire, symbolising that they all will jointly work for the welfare of the society. The husband marks the parting in his wife's hair with red kumkum powder for the first time. This is called 'sindoor' and is a distinctive mark of a married Hindu woman.

Sapta-Padi
This is the main and the legal part of the ceremony. The couple walk seven steps reciting a prayer at each step. These are the seven vows which are exchanged. The first for food, the second for strength, the third for prosperity, the fourth for wisdom, the fifth for progeny, the sixth for health and the seventh for friendship. In some regions, in stead of walking the seven steps, the bride touches seven stones or nuts with her right toe. A symbolic matrimonial knot is tied after this ceremony (as seen in the picture in the first paragraph).
A symbolic matrimonial knot is tied after this ceremony Surya Darshan and Dhruva Darshan. The couple look at the Sun in order to be blessed with creative life. They look in the direction of the Dhruva (Polar star) and resolve to remain unshaken and steadfast like the Polar
star. 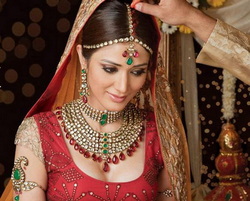 Red Saree
Sarees- The bride gets to wear two dresses (Sarees). One of them is white, symbolizing the bride’s purity prior to her wedding and the other is red and symbolizes fertility. The bride gets the first dress from her uncles and the second one from the groom’s family.
The main wedding ceremony- is a long and elaborate affair, which lasts for  several hours in that the couple takes the saptapadi or the seven steps together before god symbolized by fire and light.
Claypot- Before walking into the ceremony, the groom must step on a clay pot and break it. This symbolizes his strength.
Fire- is an important symbol in Hindu weddings - it shows that Dahma is present.
Mangalsutra- is one such symbol of marriage. It is a sacred thread of love and goodwill worn by married women as a symbol of  their marriage.